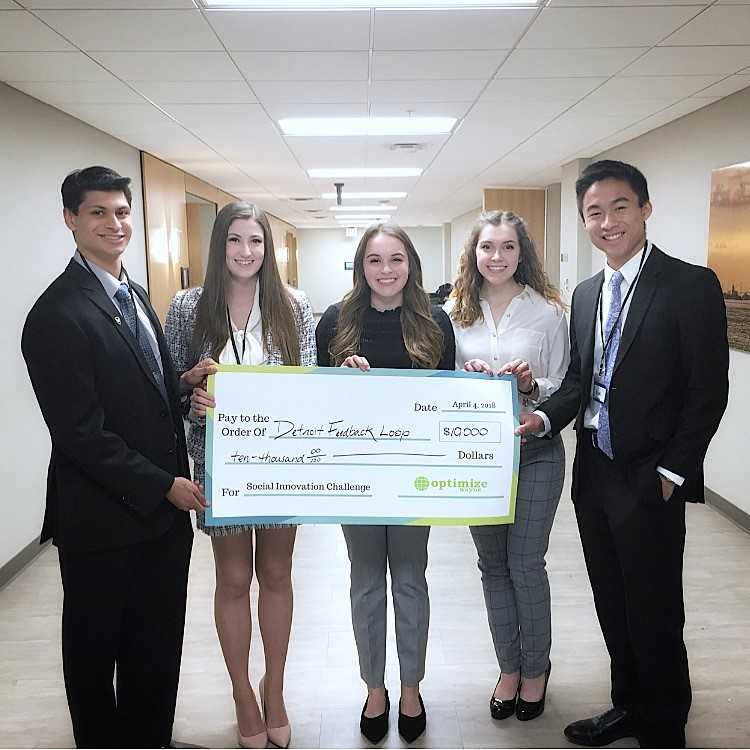 The group, led by Juniors Nicholas Ang and Camilla Cascardo, received a $10,000 grant from OptimizeWayne for their work delivering leftover food from events and restaurants around Wayne State's campus to local soup kitchens and homeless shelters. (Read more about the group and the work they do here).

The group plans to use the grant money to purchase food transportation equipment, food handling equipment, marketing materials and for event planning.

Ang said there were over 60 different teams who applied to go through OptimizeWayne's selection process. "There were so many amazing teams out there," he said. "We thought everyone had great ideas and good plans, so we were just trying our best to see how well we could pitch ourselves and we were surprised when we were told we won it."

President of OptimizeWayne Kavya Davuluri, a senior Psychology major and fellow Honors student said that Nick and Camilla were some of the brightest and most dedicated individuals she had ever met. "Their passions are so diverse and genuine that it's impossible not to notice how they light up when they're talking about their work, whether it's with research, their future careers, or their organizations," said. "For the judges and the OptimizeWayne Core Team, as granters of these funds, the most important thing is that we trust that the funding is going to really be used for a sustainable social impact. And when Nick and Camilla pitched on the day of OptimizeWayne's selection pitches, they left no shred of doubt: Detroit Feedback Loop is their mission and they're willing to do whatever it takes to prevent wasteful food dumping and serve a population of Detroit that is often overlooked. Every member of our team is proud of them, their work, and to call them OptimizeWayne alums."

Cascardo said they followed all of the advice they were given, including setting up meetings with investors and stakeholders downtown and on Wayne State's campus and interviewing supervisors in soup kitchens.

"We noticed this dedication to serving the city's citizens who don't have stable access to food. They never assumed that they knew what the problem was and that they were the best solution. Rather, the team recognized that they had to understand the issue and set out to do research, find stakeholders, and take in mentorship. They attended every workshop and made use of every resource we had to offer them--and more," Davuliuri continued.

The importance of sustainability was also reinforced to them.

"The worst thing would have been to get the award and make something for the two years that we are here and then have it disappear," Ang said. "They definitely taught us all the important steps in making something long-lasting, and part of it was rooted in all of our partnerships. We started forming bigger partnerships with organizations in Detroit.

Detroit Feedback Loop, which is in the process of becoming a registered non-profit with the State of Michigan thanks in part to the helped they received from OptimizeWayne, has formed additional partnerships with Forgotten Harvest and WSU Dining Services.

Additionally, Ang said that Detroit Feedback Loop is also looking to recruit new members to help serve on the group's Board of Directors since they will both be seniors this upcoming year. "We are looking for people to help for something more than just being in an organization." If you are interested in helping or possibly serving on the DFL's Board of Directors, please one needs to email his or her name, phone number detroitfeedbackloopwsu@gmail.com.