While rooted in Detroit, the Irvin D. Reid Honors College connects students to the entire globe. Among its global projects is a new documentary on African democracy.

In 2008, Dr. Irvin D. Reid, president emeritus of Wayne State University, established the African Democracy Project, bringing Honors students and others to Africa for a close look at democratic progress on the continent. From this exploration, the documentary "African Democracy: Hope and Challenges" emerged. The documentary is based on more than 200 interviews of citizens of six African countries as well as nearly 75 U.S. students. The project was initially funded by the Eugene Applebaum Chair in Community Engagement with the support of Applebaum Family Philanthropy.

The 90-minute documentary explores responses to several critical questions: What were citizens' hopes and dreams? Where did they think African democracy ranked among the different countries? To what extent do national leaders share governance with local authorities? What do they see as African nations' greatest challenges? Did they think that corruption is a serious challenge? Finally, are they optimistic for the future of democracy on the continent?

The documentary also includes footage of six historical figures in the evolution of democracy on the African continent. They are Kwame Nkrumah of Ghana, Jomo Kenyatta of Kenya, Somora Machel of Mozambique, Julius Nyeree of Tanzania, Patrice Lamumba, of Congo and Nelson Mandela of South Africa. Archival images and footage are also included of other contemporary African leaders such as Nana Akufo Addo of Ghana, Mohammadu Buhari of Nigeria, and Cyril Ramaphosa of South Africa.

Finally, the documentary includes interviews with American students confronting stereotypes that shaped their own perceptions of and expectations about African democracy. This exploration not only expanded their horizons but also deepened their understanding of their own government, its accomplishments and challenges.

Awards and Recognition for "African Democracy: Hope and Challenges" 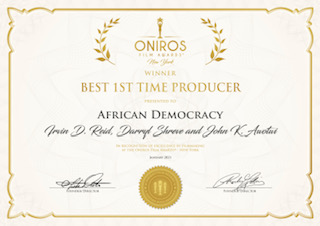 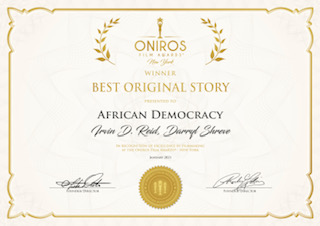 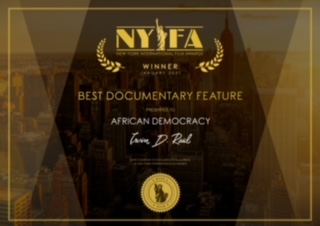 Awards and Recognitions for "African Democracy: Hope and Challenges" include: