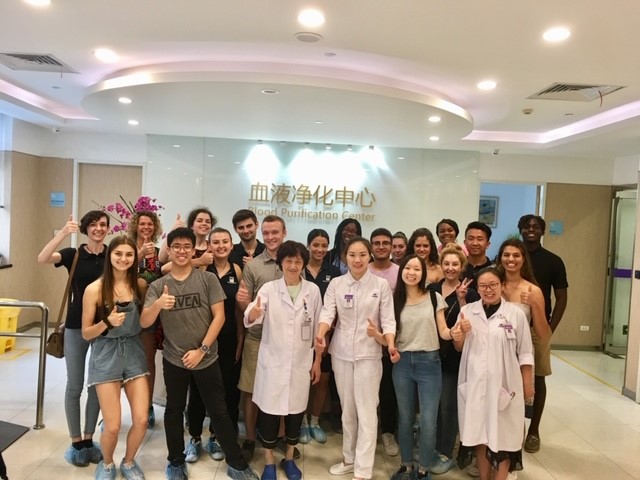 This past July, I spent a month in China with a study abroad program at Nanjing Medical University. The trip was made possible by the Wayne State Med-Direct Program. Not only was I able to see the inner workings of various hospitals, I also had the opportunity to shadow physicians and explore my own interests. Simply put, the trip was amazing. I not only was able to see the ins and outs of multiple hospitals while being able to shadow physicians to help narrow down what I want to do in the future, but I was able to immerse myself in a culture that I was not very familiar with. By the end, we each had our favorite restaurants, our go-to grocery stores, and felt as close to “locals” as we could at the end of the month. Letting go of our crutch of Google Translate, and venturing into random bakeries and restaurants for food, we really felt like we knew our way around the area. For the majority of our trip, we stayed in Nanjing. This area had less tourists than the popular cities of Beijing or Shanghai, allowing us to truly experience the daily life of a Chinese student.

We stayed at the Wutai Campus in Nanjing. This campus held many other international students, allowing us to see people from across the world who were coming to China to study at Nanjing Medical University. The best part about this campus (other than the A/C, which was a huge blessing with the intense heat and humidity we faced the entire month) was that we were right in the middle of the city. Malls, grocery stores, restaurants, bakeries, banks, and whatever else we needed were within walking distance. Everything else would simply require a short taxi or metro ride. Our first time on the metro was quite the rush! But by the end of the month, even though it was always crowded, we viewed the metro as being extremely convenient, efficient, and helpful.

The first two weeks of our trip, we did a lot of learning and site seeing. Nanjing Medical University provided culture and language classes for us to learn basic words and phrases in Chinese. “Ni hao” (hello), “xie xie” (thank you), and “shui” (water) quickly became a part of our daily vocabulary. We relied on picture menus at restaurants, Google Translate, and Rosetta (one of our cohort members) who had taken a few semesters of Chinese to get us by. We were also able to visit beautiful sites, such as Purple Mountain, Monkey King Mountain, The Underground Palace, and a Confucius Temple, all while staying in the same Jiangsu Province.

We planned a very last minute, very rushed trip to Beijing during the third weekend of our trip. To be able to say that I have been to one of the Wonders of the World is amazing and I am so grateful for that. We went to the Jinshanling portion of the Great Wall. I highly recommend it! It was farther to get to, however was less restored. This means there were less tourists, and you actually get to experience the original pieces of the Great Wall that were built thousands of years ago.

The last two weeks in Nanjing, we spent at the Sir Run Run Hospital. We were able to see a multitude of different specialties, including ophthalmology, dermatology, orthopedics, respiratory, and even traditional Chinese medicine. If I were to describe their hospitals in 2 words, I would say “organized chaos.” There are so many people, and so many things going on, however there still seems to be order within the hospital. Another interesting thing was that during lunch time (from 11-2), the entire hospital slows down. The lights are dimmed, it is quieter, and even the elevators stop working! Refreshing naps were common during our lunch break, especially on the comfortable second floor cafe couches. (P.S., I vote we implement this in the United States).

Our time in the hospital was perhaps the most beneficial for me. As a group of 10 premedical students coming to learn about the healthcare system of China, comparing and contrasting different practices and policies will prove to be advantageous as aspiring physicians. From the robot machines on autopilot going around the hospital delivering medicine to patients, to the CT machines that let patients pickup their own scans, I quickly noticed that this hospital was all about efficiency. The huge population of China also drastically reduces the expectation of privacy that we hold so dear in America. The amount that the doctors let us observe and ask was much greater than expected for students not yet in medical school. I was able to observe many different types of surgeries, such as a cataract surgery, a hysterectomy, and a removal of a fatty mass on a patient’s back. I was also taught how to give a breast exam on real patients and was able to perform a freeze dry session to remove the warts off a patient. Going into a medical system that protects patients and their privacy to such a high extent in America is admirable, however to our curious premedical minds, it was so great to see a hospital that was so open to letting us immerse ourselves within the shadowing experience.

Our last weekend, we went to Shanghai. Our hotel, the Radisson, was only about a mile from The Bund. While pretty in the day, this skyline of Shanghai was a whole new experience at night. The markets were also a fun experience on their own. The market went to, the A.P. Xinyang Fashion & Gifts Market, had so many different stalls to shop at that one could spend an entire day or two there. If I were to give advice for the market I would say go in with an open mind and be prepared to barter!

The difference between Nanjing, Beijing, and Shanghai was drastic. Nanjing reminded me of visiting my family in Syria or Abu Dhabi when I was younger, with tall apartment complexes and an older vibe. When walking through Beijing, it was impossible to not notice the history that we were surrounded with. While driving to the Great Wall, our tour guide was giving us fun facts of how different areas of Beijing were only accessible by the Emperor and his court. This blew my mind. Emperors! Thousands of years ago, there were dynasties in the area we were visiting. This is profound when compared to how young America is. When in Shanghai, I got very strong New York vibes. There were a lot of lights and a lot more English. This city was obviously more of a tourist attraction.

Overall, my time in China is something I will never forget. To go from living in a college dorm to living for a month in China was quite the experience. If given the chance, everyone should try staying in a country they are not familiar with. Without even realizing it, we as people will find the small similarities that unite us. It reminds us that even across the world, we are not so different after all.

I want to thank Wayne State University and the Med-Direct program again for this amazing once in a lifetime opportunity.

Submitted by a student of Wayne Med-Direct cohort 2016